Two months ago on March 26th was the 53rd anniversary of the opening of the Jule Styne-Bob Merrill musical “Funny Girl” on Broadway at the Winter Garden Theatre.  The stars were Broadway veteran Sydney Chaplin, Charlie’s son, carrying four previous Broadway shows under his belt, playing opposite a relative new-comer, Barbra Streisand., who had only one previous Broadway credit, that of the scene-stealing “Miss Marmelstein” in Harold Rome’s “I Can Get It For You Wholesale.”

A little more than one week later on Sunday, April 5th, the cast, the composer, the lyricist and other creatives  and recording executives gathered in a New York City recording studio–Manhattan Center Studios, 311 West 34th Street– to record the now legendary Original Broadway Cast recording (note: NOT “soundtrack”) for Capitol Records.  Barbra, who had an exclusive contract with Columbia Records, was loaned to Capitol for this Broadway Cast recording. Along with the cast was a legend himself, albeit unknown to most.  That was the Broadway and New York entertainment photographer William “PoPsie” Randolph.  PoPsie had the assignment to record the the session using his still camera.  Which he did with wonderful black and white clarity.

Before you click to see some of those pictures, there’s one picture that’s here instead.  This is it below. 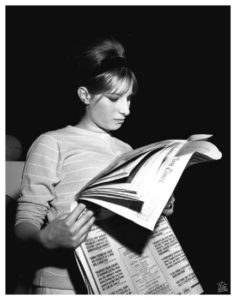 What is Barbra reading so intently?  Why The New York Times, of course, which had published just that same morning, April 5, 1964, a profile of the new star, “She Couldn’t Be Medium” by Joanne Stang.  The secondary headline reads “New Star In Town Traces Her Rise to ‘Funny Girl.”

What did Ms. Stang write? She begins,

Miss Marmelstein came back to Broadway the other night, disguised as Fanny Brice. There was nothing frumpy about her appearance this time–in a black sequined dress that clung to her thighs like a patch of lichen, she threw her head back, sang her heart out, and knocked New York on its ear…

The rest, as most of you know, is history.

Some of PoPsie’s photographs of that day can be seen on the sidebar at the right, or  simply click “Recording ‘Funny Girl,’ the Original Broadway Cast” .