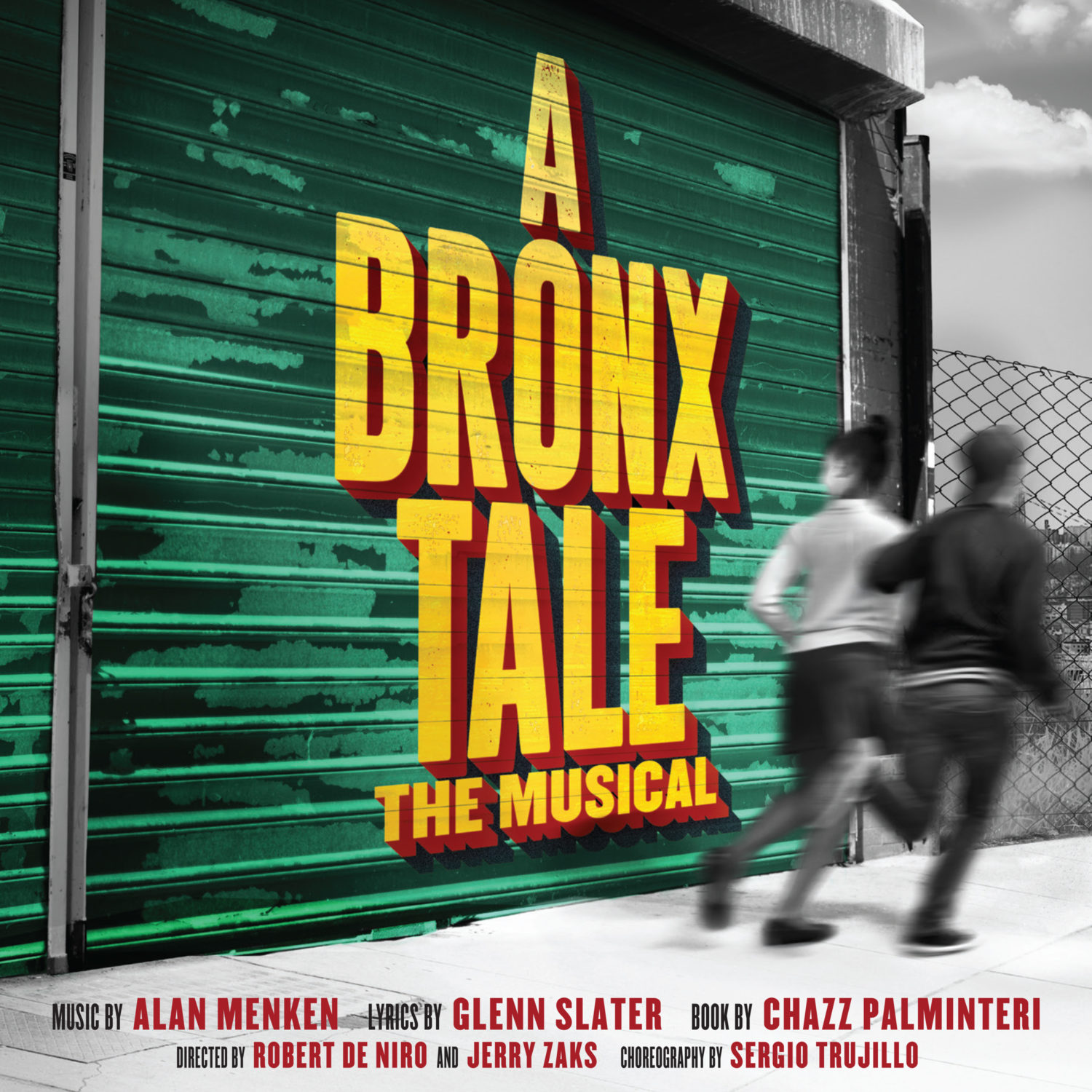 I’ll go right to the point. I love the Broadway score of “A Bronx Tale The Musical” and its Original Broadway Cast recording. The surprise for me is that I never expected I would.

I suspect that if you were between the ages of 10 and 30 during the early 1960s, or if you were from The Bronx or anywhere in New York City, or if today you find yourself unconsciously moving in your seat whenever you hear the scores of “Little Shop of Horrors” or “Jersey Boys,” or if you’re simply someone who likes show scores with energy, excitement, passion, rhythm, melody and intelligent lyrics then I believe you, too, are going to love this recording of the 2016 Broadway Cast.

“A Bronx Tale The Musical” with music by Oscar, Grammy and Tony Award winner Alan Menken and lyrics by Grammy Award winner and Oscar and Tony Nominee Glenn Slater and book by Academy Award Nominee Chazz Palminteri evolved from Palminteri’s autobiographical one-man play of the same name which played off-Broadway in 1989, after first being seen in Los Angeles. Subsequently, Robert DeNiro made his directorial debut with the film version which premiered in 1993, and in which he also starred. Later, in 2007, Palminteri performed his show on Broadway, directed by Jerry Zaks. Flash forward to 2016. Before one could say maron “A Bronx Tale The Musical” opened at Paper Mill Playhouse in Milburn, NJ in February 2016 and on Broadway on December 1st, co-directed by Robert DeNiro and Jerry Zaks and with choreography by Sergio Truijillio.

Overflowing with a cast of highly talented Broadway performers, plus a couple of impressive Broadway debuts, the sound of “A Bronx Tale” bursts forth with its first song “Belmont Avenue,” grabbing the listener and not letting go through its nineteen tracks. The score and the performers create a world that is unique, and one that many would recognize. Much of the credit must belong to those behind the scenes—veteran recording producer Tommy Mottola as well as his co-producers Ron Melrose, Alan Menken and Rick Kunis. Ron Melrose also supervised the music and the arrangements. Doug Besterman is responsible for the orchestrations. The sound of “A Bronx Tale” is the result of these superb craftspersons working together with the composer and lyricist to produce this dynamic recording of the energetic score.

Prolific and impressive as is Alan Menken’s list of show and movie scores, there have been only a few from that list that truly caught my interest over the years since “Little Shop” and “Beauty and the Beast.” The score for “A Bronx Tale” Menken brings a fresh, in-the-moment, in-your-your face sound that harkens “Little Shop” in the opening number then becomes its own distinct voice. Menken has finally jumped out of the sugar bowl and back onto the streets.

Glenn Slater’s lyrics for “A Bronx Tale” add the emotional and descriptive specificity to create and to breath to life into the world of the Bronx in the early 1960s. An adroit lyricist no doubt, but one who’s work never pulled me in prior to this score. I’ve been a big fan of Phantom of the Opera but it’s sequel, Love Never Dies, for which Glenn Slater wrote the lyrics, hasn’t had the same hold. As for the television musical series Galavant, for which where Slater and Menken have written songs, well, it just doesn’t grab me either. Rather too silly for my taste—perhaps the songs if divorced from the shows themselves? Ah, but, the score for “A Bronx Tale” is something else entirely. Fresh, alive, full of heart and emotion, tuneful, funny and easy to wrap your arms around, like your favorite goombah.

Take the opening number, “Belmont Avenue.” The doo-wop opening notes by a group of mixed voiced street singers immediately sets the time and place. “Cologero” (the gifted Bobby Conte Thornton) quickly introduces himself and his world.

“I can hear/the church bells
And smell/the freshly baked bread.
CHORUS: Aah-ooo
See the storefront awnings/
The neon/green, white and red
CHORUS: Aah-ooo
Cannollis on tray after tray
Salamis strung up on display
And Italians are all that you see
CHORUS: Yeah yeah and the sidewalks swinging
CHORUS: Yeah yeah and the girls are singing
GIRLS: Shoop shoop shoop
And they pass my stoop
And the pushcart peddlers
they hock their wares door to door
FISH PEDDLER: Pesce fresca, pesce fresca.”

Makes one just want to be there.

In his Broadway debut young Hudson Loverro stands out and deserves a big hand for his vocal expertise as “Young Colagero.” He exudes such charm and charisma in his solo “I Like It” that he doesn’t come across as cocky when he sings:

“Everywhere I go
Up and down the street
Everyone’s my buddy
They’re fallin’ at my feet.
I’m more than a kid
I’m part of this game.
They know where I go
Who I’m with and my name.
They call me ‘C’
and I like it.”

As “Sonny” the always impressively talented Nick Cordero could easily be one of the Sinatra-Martin Rat Pack on the stage in Las Vegas as he delivers “Nicky Machiavelli,” a swinging cautionary song with the tone and cool temperament reminiscent Kurt Weill’s classic “Mack The Knife.” Just like that classic, the melody and lyrics get in one’s head and stay.

There is a beautiful up-tempo ballad, “One Of The Great Ones” also sung by Nick Cordero with a masculine wistful patina that make Slater’s poignant lyrics shine even more than they might on paper.

“There’s a kind of a girl
who can send your heart whirling away.
But those are the kind
you don’t happen to find every day.
You’ll meet smart ones and tough ones
Just good enough ones
They’re fine kid, go out there, enjoy.
But in all of your life
You get only three shots
at the real McCoy.
And this one could be
One of the great ones
This one could be
One of the ones you won’t forget.
If the stars in her eyes
Make your confidence rise
like a rocket that’s ready to blow
Then she might be
One of your great ones, don’t let her go.”

Richard H. Blake, the veteran Broadway performer, gives the recording and the story its moral and emotional center as Cologero’s father “Lorenzo,” who tries to protect his son from absorbed by the Bronx streets. He shines in his two big numbers “Look To Your Heart” and “These Streets.”

As the grown “Cologero” Bobby Conte Thornton has the majority of the numbers, after all it’s his tale being told. He more than stands squarely with Codero and Blake commanding the recording. Equally impressive are the women, starting with Ariana DeBose as Cologero’s love interest “Jane,” his first great one. A bi-racial couple, their duet “In A World Like This” protests discrimination while professing the positiveness of their shared love.

Months ago, when I looked at this Broadway season’s shows that were then yet to open “A Bronx Tale” was not on my list of new non-revival musicals to see. I didn’t know the play, I’d never seen the film. I thought I had no interest. After listening to this recording “A Bronx Tale” has captured my heart, jumped to the top of my list and and I can’t wait to buy a ticket. It’s now a must see show.

You are going to want this recording.

Pre-order the CD directly from

In mid-April the CD will be available at Broadway’s Longacre Theatre, and the CD is scheduled to be released approximately on May 12th. The CD will include a forty-page full color booklet containing the lyrics, production photos, an essay by Alan Menken and notes from Glenn Slater, Robert DeNiro, Chazz Palmenteri, Jerry Zaks and Sergio Trujillo.